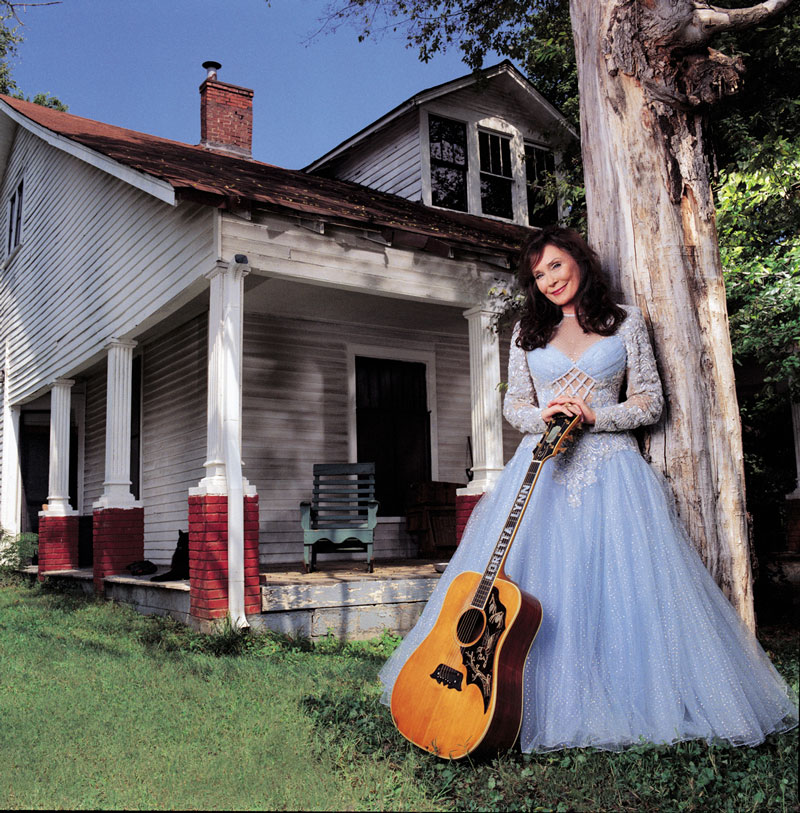 “To make it in this business, you either have to be first, great or different,” says living legend Loretta Lynn. “And I was the first to ever go into Nashville, singin’ it like the women lived it.”

Loretta first arrived in Nashville 55 years ago, signing her first recording contract on February 1, 1960, and within a matter of weeks, she was at her first recording session. A self-taught guitarist and songwriter, Lynn became one of the most distinctive performers in Nashville in the 1960s and 1970s, shaking things up by writing her own songs, many of which tackled boundary-pushing topics drawn from her own life experiences as a wife and mother.

In addition to being “first,” she was also “great” and “different.” Loretta Lynn’s instantly recognizable delivery is one of the greatest voices in music history. As for “different,” no songwriter has a more distinctive body of work. In lyrics such as “Don’t Come Home A- Drinkin’” and “Your Squaw Is on the War Path” she refused to be any man’s doormat. She challenged female rivals in “You Ain’t Woman Enough” and “Fist City.” She showed tremendous blue-collar pride in “Coal Miner’s Daughter” and “You’re Lookin’ at Country.” She is unafraid of controversy, whether the topic is sex (“Wings Upon Your Horns”), divorce (“Rated X”), alcohol (“Wouldn’t It Be Great”) or war (“Dear Uncle Sam”). “The Pill,” her celebration of sexual liberation, was banned by many radio stations. Like the lady herself, Loretta Lynn’s songs shoot from the hip.

As millions who read her 1976 autobiography or saw its Oscar winning 1980 film treatment are aware, Loretta is a Coal Miner’s Daughter who was raised in dire poverty in a remote Appalachian Kentucky hamlet. Living in a mountain cabin with seven brothers and sisters, she was surrounded by music as a child.

“I thought everybody sang, because everybody up there in Butcher Holler did,” she recalls. “Everybody in my family sang. So I really didn’t understand until I left Butcher Holler that there were some people who couldn’t. And it was kind of a shock.” She famously married Oliver “Doolittle” Lynn when she was a barely schooled child of 13. “Doo” was a 21-year-old war veteran with a reputation as a hell raiser. When she was seven months pregnant with her first child, they moved far away from Appalachia to Custer, Washington. By age 18, she had four children (two more, twins, came along in 1964). Isolated from her native culture and burdened with domestic work, she turned to music for solace.

“Before I was singing, I cleaned house; I took in laundry; I picked berries. I worked seven days a week. I was a housewife and mother for 15 years before I was an entertainer. And it wasn’t like being a housewife today. It was doing hand laundry on a board and cooking on an old coal stove. I grew a garden and canned what I grew. That’s what’s real. I know how to survive.”

Doo heard her singing at her chores and declared that she sounded just as good as anyone he heard on the radio. He bought her a guitar and told her to learn how to play it and write songs with it. Loretta says her songs were so forthright because she didn’t know any better.

“After he got me the guitar, I went out and bought a Country Song Roundup. I looked at the songs in there and thought, ‘Well, this ain’t nothing. Anybody can do this.’ I just wrote about things that happened. I was writing about things that nobody talked about in public, and I didn’t realize that they didn’t. I was having babies and staying at home. I was writing about life. That’s why I had songs banned.”

Doo began pushing her to perform in area nightclubs. Executives from Zero Records heard her in a nightspot across the border in Vancouver, Canada. She soon recorded her debut single, “I’m a Honky Tonk Girl,” for the little label. Loretta made herself a fringed cowgirl outfit, and she and Doo drove across the country in his old Mercury sedan promoting the single at station after station.

Astonishingly, it worked. The disc hit the popularity charts in the summer of 1960 and brought the couple to Music City. She began singing regularly on the Grand Ole Opry after her debut on Oct. 15, 1960. The show’s Wilburn Brothers took her under their wings. Teddy Wilburn helped to polish Loretta’s startlingly original songwriting style. Brother Doyle Wilburn took a tape of her singing “Fool #1” to producer Owen Bradley at Decca Records. Owen liked the song, but was already working with Kitty Wells, Goldie Hill, Brenda Lee and Patsy Cline and said he didn’t need another female singer. Teddy told him that he couldn’t have the song if he didn’t sign its singer. As a result, Brenda had a smash pop hit with “Fool #1,” and Loretta got a Decca Records contract.

Like everyone else who encountered her, Owen Bradley was smitten with Loretta’s innocence, individualism, infectious wit, independent spirit, humorous candor, refreshing frankness and immense talent. In fact, he came to regard her as “the female Hank Williams.”

Loretta’s Decca chart debut came with 1962’s “Success.” It became the first of her 51 top-10 hits and led to an invitation to join the Grand Ole Opry cast later that year. Her fellow Opry cast member Patsy Cline taught her how to dress, style her hair and wear make-up. The Wilburns began featuring her on their nationally syndicated TV series. She sang a series of sassy domestic ditties with her childhood hero, Ernest Tubb. As a solo, she hit her stride with “Wine, Women and Song” (1964) and “Happy Birthday” (1965), both of them feisty, don’t-step-on-me numbers.

“She’s the spokesman for the ladies,” observed the late Owen Bradley. “Loretta had a lot of different ideas, and they were very fresh. Women’s lib was also coming on at that time. You have to be in the right place at the right time. And I think Loretta was standing right there.”

“Most of my songs were from the women’s point of view,” Loretta wrote in her best- selling autobiography. “That’s who I’m singing about and singing to during my shows. And the girls know it….Most of my fan club is women, which is how I want it.”

In 1967, she began picking up various Female Vocalist of the Year trophies. She and Conway also won a long string of Duet of the Year awards beginning in 1971, The industry showered her with BMI songwriting honors, Gold Record plaques, a Grammy Award and other accolades. In 1972, she became the first woman in history to win the Country Music Association’s Entertainer of the Year trophy.

By the mid-1970s, Loretta Lynn was an undeniable superstar. She was featured on the covers of Newsweek (1973), Redbook (1974) and many other mainstream national publications. With her kookie humor, scrambled grammar and unpretentious manner, she became a TV talk-show favorite.

One of the most remarkable things about Loretta Lynn is how she renews her creativity time and again. Two years after she was inducted into the Nashville Songwriters Hall of Fame in 1983, she was back on the charts with the hit, “Heart Don’t Do This to Me.” In 1988, the year she entered the Country Music Hall of Fame, Loretta recorded with k.d. lang. She earned a Gold Record in 1994 with Honky Tonk Angels, a trio CD with Dolly Parton and Tammy Wynette.

Doo died in 1996. Numb with grief, Loretta admits that she was lost in a fog for more than a year. But she came back again with a 2000 CD titled Still Country. She also returned to the concert trail.

Loretta published a second memoir, Still Woman Enough, in 2002. She was honored at The Kennedy Center in 2003, yet pushed forward again the following year by winning two Grammy Awards for Van Leer Rose, a collaboration with rocker Jack White. Also in 2004, she published a book of recipes and anecdotes titled You’re Cookin’ It Country.

Lynn is also one of the most awarded musicians of all time. She has been inducted into more music Halls of Fame than any female recording artist, including The Country Music Hall of Fame and the Songwriters Hall of Fame, and was the first woman to be named the Country Music Association’s Entertainer of the Year in 1972. Lynn received Kennedy Center Honors in 2003 and a Presidential Medal of Freedom in 2013. She has won four Grammy Awards (including a Grammy Lifetime Achievement Award in 2010) and sold more than 45 million records worldwide.

In March 2016, Legacy Recordings released FULL CIRCLE, Loretta’s first new studio album in over ten years. Produced by Patsy Lynn Russell and John Carter Cash, and recorded at the Cash Cabin Studio in Hendersonville, Tennessee, FULL CIRCLE took listeners on a journey through Loretta’s musical story, from the Appalachian folk songs and gospel music she learned as a child, to new interpretations of her classic hits and country standards, to songs newly-written for the project.

One of the most deeply personal albums of Loretta Lynn’s career, Wouldn’t It Be Great communicates in song the hard truths and spiritual insights Loretta has gathered throughout her life and reflects the resilience that sustains her still. Comprised entirely of songs written (or co-written) by Loretta, the album premieres new compositions alongside soulful reinterpretations of enduring classics from her catalog.

“This new record means so much to me, but this last year I had to focus on my health and I decided to hold up the release,” said Loretta. “I’m feelin’ good and look forward to it comin’ out. It was really important to me to be a part of it being released and I’m excited to celebrate with everybody!”

Loretta Lynn’s life is still a work in progress. She’s still out there on the road, still writing songs and still recording them as only she can. “I ain’t a star – a star is something up in the night sky,” says Loretta Lynn. “People say to me, ‘You’re a legend.’ I’m not a legend. I’m just a woman.

Get all the latest information on Events, Sales and Offers.